If what you need is a budget option tablet that features the right selection of features for drawing, graphic design, and editing, the XP Pen Deco 01 v2 may be the perfect device for you. Today, we will review the several features that make it a perfect choice for drawing and other graphic design purposes.

Overview about The XP Pen Brand

XP-Pen has been around for just a little while. The majority of that period has been dedicated to developing the perfect technology that supports the various graphics tablets they produce. The company was founded in 2005, but the XP-PEN Tech Company was only founded in 2015 in the United States.

By 2017, their products had managed to gain some popularity across several regions. However, in 2019, XP-Pen became a holding subsidiary of Hanvon Ugee Group. The brand is known for its graphics tablets, stylus pens, light pads, and digital graphical products.

The XP Pen Deco 01 V2 is another tablet input device that is primarily designed for artists. It provides a more effortless and more flexible means of inputting commands when drawing or editing. One of the several highlights of the device is that it is quite versatile. It is compatible with Windows, MAC OS, and Android: what this implies is that the tablet is compatible with several operating systems. 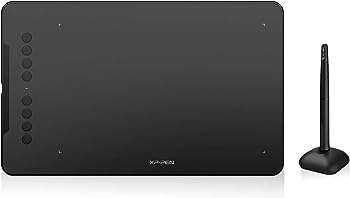 Now, let's take a look at some of the most significant features of the pen tablet that makes it one of the most dependable options for graphics design.

The XP Pen Deco 01 V2 has a simplistic, albeit, modern design that is pleasing to look at. Thanks to the flexibility of the tablet's orientation, it can be used by both left-handed and right-handed users. On the front of the tablet, you have an extensive drawing area with a few shortcut buttons on the left.

Four glowing arrows define the drawing area at the corners, lighted by LEDs. The location of the buttons on one side makes it easy to achieve multi-gesture commands simultaneously with both hands. With a thickness of 8 mm, it is handy enough to be carried along when on the move. 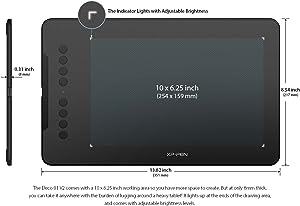 The XP Pen Deco 01 V2 is not a stand-alone device, and it doesn't feature a display. The drawing area measures approximately 10" x 6": generous enough to move your hand around as much as you would like when drawing. We would also like to comment on the durability of the drawing surface. The surface is made from an anti-scratch material that sufficiently resists scratches, either from the pen or any similar agent.

A common problem with smooth tablets surfaces is that stylus tips tend to glide over them, making it challenging to make delicate and precise strokes. However, this device comes with a textured surface that helps to achieve a somewhat natural resistance, such that it feels like you're drawing on paper with a pencil. The balance between subtlety and aggressiveness on the drawing surface makes it the perfect graphics tablet. 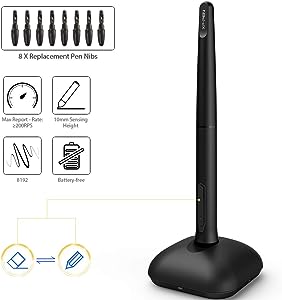 The pen has to be the most significant feature, apart from the tablet itself. One interesting fact about the XP Pen P05 stylus is that it needs no batteries to work; neither does it require charging. It makes use of a technology that is quite similar to that of the Wacom Pens. It uses electromagnetic resonance to transfer signals wirelessly.

The pen features an ergonomic design that makes it so comfortable to hold for extended periods. The part of the pen close to the tip is slightly bigger than the other part of the body. The shape of the pen helps to achieve perfect balance when the pen is gripped.

Furthermore, the stylus has 8192 levels of sensitivity and tilt detection up to ±60°. When tested, the pressure sensitivity was impressive, likewise the tilt detection. Like you would expect, the buttons on the pen are programmable to perform different functions, depending on personal preference.

The pen stand is the most overlooked feature when it comes to pen tablets. However, it is a very important accessory if your pen will last for a long time. What we found surprising is that a quality pen stand comes with the tablet, given its affordability. In addition to being the pen storage, it secures the pen and prevents it from rolling around or getting lost.

In addition to the pen stand, you get eight replaceable pen nibs that are safely stored away in a padded container. However, you should know that these nibs will need replacement if you use them regularly.

As we have said before, the XP Pen Deco 01 V2 is a budget option tablet. It is not as expensive as Wacom tablets, but the functionality doesn't necessarily equate the affordable price. If you have a limited budget but still need a large enough, durable, and functional graphic tablet, this is one of the perfect devices for you.

The package includes important accessories like the stylus pen, replacement nibs, a pen stand, and more. It is well available on the market today, and you can easily get one whenever you are ready. 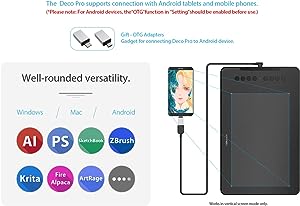 Setting up your Deco 01 V2 involves the following simple steps

The first version of this tablet was functional enough. However, with the several improvements that have been made to this version, it has become a highly improved device. It is one of the best graphic tablets from the lower end of the price spectrum.

The drawing surface is wide enough, the stylus needs no charging nor batteries, it features improved drivers, and it is compatible with different operating systems, including Android. So yes, you should buy the XP Pen Deco 01 V2 tablet if what you need is a good budget option pen tablet.

While the XP Pen Deco 01 V2 tablet is not the most sophisticated graphics tablets on the market, but it is certainly one of the best when it comes to budget option pen tablets. The affordability was quite astounding when we considered the many impressive features. It features a relatively large drawing surface and a unique wireless pen technology that works by electromagnetic resonance.

We recommend the pen to anyone who has a limited budget but need a decent graphic tablet. As it does not feature its own display, it is designed to connect easily to a computer. It doesn't matter if your PC has a MAC, Android, or Windows operating system, a smooth connection is guaranteed if you have the right driver installed.